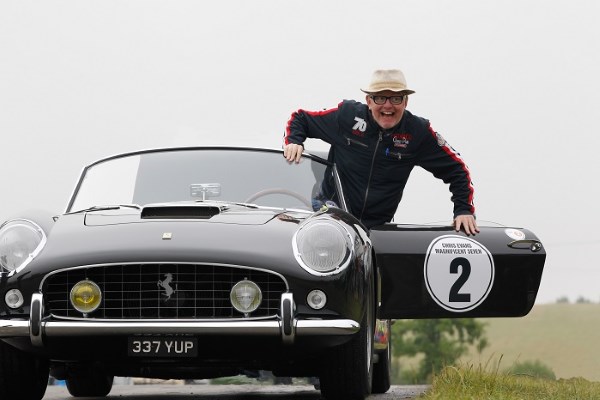 Carfest – the Chris Evans-inspired fund-raisers for BBC Children in Need, where Ferraris, Maseratis, and Mustangs top the on-track bill, comes to you in the form of two fun-filled festivals packed with family entertainment. As the sun sets on Goodwood Festival of Speed, British Grand Prix, and Glastonbury 2014, the spotlight switches to August’s two award-winning CarFest extravaganzas.

Just over three years ago BBC Radio 2 broadcaster Chris Evans had a dream. It was to create a fundraising event that celebrated his passion for fast cars, rocking music artists, and a love of good cake. Now in its third year, CarFest 2014 is back with plenty of good honest fun and all in aid of BBC Children in Need.

To date, the four hugely successful, sell-out CarFests have wowed more than 200,000 visitors and the intoxicating mix of fast cars, live music, and great festival food have raised over £2m for BBC Children in Need.

“The wonderful world of CarFest is back! Prepare yourselves for a feast of fabulous festival food, marvellous fast cars and live shows from the kind of bands we all love. It’s going to be utterly, scrumptiously fantastic!”

Topped by Evans’ own ‘Magnificent 7’ collection of amazing Ferraris, the Track Sprint line-up of dazzling cars sticks with the Sevens theme with lots of new and exciting categories being fuelled for 2014. There’s a Rock Star Seven, Hod Rod Seven, Movie Car Seven as well as more familiar F1 and Rally Sevens. The special Anniversary Seven will include Nick Mason’s stunning Maserati 250F to celebrate the Italian company’s centenary, while the Muscle Car Seven will feature Ford’s newly revealed 2015 Mustang to mark 50 years of the American classic.

Away from the Track Sprint, the popular Showground will once again be packed with massive stunts and huge displays while the Outdoor Play Area will be filled with the very best children’s entertainers and performers. Britain’s Best Pavilion is another much loved CarFest attraction – it showcases food and drinks created by small producers from throughout the UK. The equally popular Cakes v Pies competition returns, too, with judges again including TV personalities Mary Berry and Paul Hollywood.

Air displays are also a huge attraction with the RAF Red Arrows and Battle of Britain Memorial Flight among the flying favorites.

As if the magical sounds of Merlin and Ferrari V12 engines aren’t enough aural excitement for one weekend, a host of famous bands will also be strutting their stuff on Friday, Saturday, and Sunday evenings on stages compered by the inimitable Evans. This year’s bill toppers include Erasure, Eliza Doolittle, Simple Minds, Seasick Steve, Scouting for Girls, Jools Holland, The Feeling, 10cc, Chas & Dave, Jamie Cullum, and Texas.

While CarFest South again is a complete sell-out and all weekend tickets for CarFest North have also been snapped up, there are a few remaining Friday and Sunday tickets available for Oulton Park.

For more information on how to procure the few remaining tickets and all the latest news, visit the official CarFest website at www.carfest.org