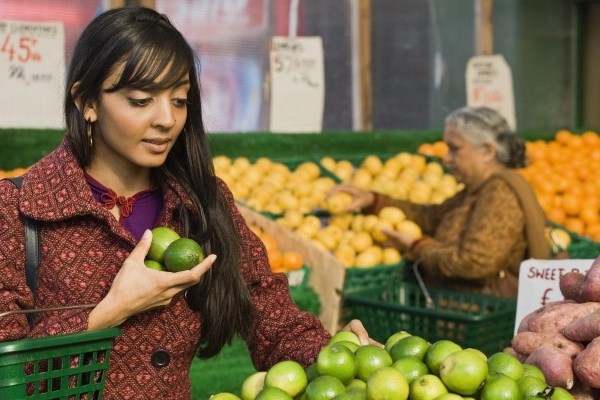 To mark World Cancer Day on February 4th 2011 The Source has been in touch with Cancer Reseach UK to discuss what you can do to help you decrease the risk of developing food related cancer.

The following information is supplied courtesy of Cancer Reseach UK

Our diets are made up of hundreds of different types of food, containing thousands of nutrients and chemicals. Some of these protect us against cancer, while others increase risk. We all eat different things in different amounts, which confuses the picture even more. As well as that, there are more than 200 types of cancer. So trying to find out how diet affects cancer risk is extremely complicated.

An international research study is going on at the moment across Europe to try to answer more questions about diet and cancer. The study, called EPIC, involves 500,000 people in 10 countries. EPIC stands for European Prospective Investigation into Cancer and Nutrition. Over many years, the researchers are recording these people's food intake, monitoring their health records and noting who gets cancer and who doesn't. Then they may be able to link certain factors in the diet with the risk of getting particular cancers. It is the largest study into diet and cancer ever conducted.

The results of EPIC could have huge implications for the prevention of cancer. To start with, the researchers are looking into common cancers such as breast, lung, bowel, prostate and stomach cancer. But the size of this study means that researchers will also be able to look into the possible role of diet in rarer cancers. The results of the study will have implications for cancer prevention everywhere. The results will be presented at international conferences and published in journals available to researchers and health officials throughout the world.

There is information about how to work out the right weight for you in CancerHelp UK. It is measured by comparing your weight with your height.

Overweight or obese people have an increased risk of bowel cancer and pancreatic cancer and this could be because they tend to have higher insulin levels.

'Obese' means being more than about 25% overweight.
Obesity can also increase your risk of:

Researchers are not sure exactly why obesity increases the risk of these cancers. Breast cancer is hormone linked. Its development is affected by amounts of the sex hormones oestrogen and testosterone. Fatty tissue produces an enzyme called 'aromatase'. Aromatase affects the balance between these hormones and this may explain why being obese affects your risk of breast cancer.

We now know that alcohol can increase your risk of a number of cancers. It increases the risk of mouth cancer, throat cancer which includes pharyngeal cancer, laryngeal cancer and cancer of the foodpipe (oesophagus), liver cancer, breast cancer and bowel cancer. Even moderate alcohol intake increases your risk of cancer. A recent UK study showed that women who drink one or two drinks a day have a slightly increased risk of cancer.

There has been a lot of interest in whether eating certain foods might reduce the risk of certain types of cancer. Despite a great deal of research, we haven't found any convincing links.

There is some evidence that eating plenty of fruit and vegetables can protect against cancer. The evidence is strongest for cancers of the upper digestive system, such as the mouth, food pipe (oesophagus) and stomach.

Fruit and vegetables contain a wide variety of nutrients and are high in fibre. Scientists are working to find out about which of these nutrients protect against cancer. So far they are fairly sure that vitamins A and C, and folate are playing an important role in protecting against cancer. It's a complicated picture, but as far as we know, it is not enough to take vitamin supplements. You have to eat the fruit and veg! There is something about eating fresh vitamin rich foods that is protective.

It is also possible that other foods and nutrients might increase risk. Again it has proved difficult to show any firm links, apart from alcohol. The strongest evidence we have is probably for high intakes of red or processed meat increasing risk.

Bowel and stomach cancer are more common in people who eat lots of red and processed meat. Red meat includes all fresh, minced and frozen beef, pork, lamb or veal. Processed meats have been preserved in some way other than freezing and include bacon, ham, salami, sausages, spam, corned beef, black pudding, pâté and tinned meat.

The way you cook meat may increase cancer risk. Certain chemicals are made when red and processed meats are cooked at high temperatures, such as on a barbeque. These chemicals can damage our cells, making them more likely to become cancerous.

There are other aspects of diet where the evidence is much less clear. Some studies have shown that dairy products reduce bowel cancer risk. Other research shows that dairy might increase the risk of prostate cancer. It is too early to be sure. There doesn’t seem to be any reason to cut down on dairy foods, but it is probably best to choose lower fat dairy products.

Many different substances are added to commercially prepared foods. But these are not all bad. Some additives stop food from going off and so can help to keep us healthy. A good example of this is a toxin called aflatoxin that comes from a mould. It grows on stored food in hot and humid countries, especially on peanuts. Aflatoxin is known to help cause liver cancer so anything that stops the mould from getting into the nuts is helping to prevent cancer.

Most additives are not thought to affect cancer risk. Colours, flavours and sweeteners are constantly investigated by researchers and if any are thought to be a real risk, they are withdrawn. Sometimes there is a scare about a particular additive.

Some years ago saccharin was claimed to be a carcinogen. Researchers had found that when it was fed to rats in huge quantities, the rates of cancer in the rats increased. We are very unlikely to eat that much saccharin and so it is unlikely to cause cancer in people, but far fewer foods contain it now than did a few years ago.

Other additives can be a cancer risk. Pickled foods may increase risk of cancer of the stomach, particularly if they are very salty. This may explain why there are such high rates of stomach cancer in Japan, where salty, pickled foods are popular.

This means chemicals in foods or drinks that are not meant to be there. For example, they could form as an unwanted effect of the manufacturing process.

Nitrosamines are chemicals found in cured meats (bacon and ham, for example) and in very small amounts in beer. Nitrosamines have been shown to be carcinogenic so the amount in foods has been cut as much as possible. In brewing, one cause of nitrosamines is a reaction between pollution in the atmosphere and the malted barley that is a main ingredient of the beer. The brewing industry has tried to cut the levels of nitrosamines in beer as much as possible. Levels are now much lower than they used to be, but it hasn't been possible to get rid of them completely.

Smoking and barbecuing foods so that they are slightly burnt on the outside causes chemicals called polycyclic aromatic hydrocarbons to form. These chemicals are known to help cause cancer. So in theory barbecuing or cooking meat and fish over a high heat could increase cancer risk. But few research studies have shown this.

Frying and baking meat at high temperatures can also create chemicals called heterocyclic amines. These may increase risk of cancer of the bowel or gullet (oesophagus), but this isn't certain. Acrylamide, another chemical that may cause cancer, has been found in foods such as crisps and chips. But there isn't proof yet that these chemicals cause cancer in humans and so there are no grounds for telling people to change cooking or eating habits because of these chemicals.

Apart from obesity and alcohol, there isn't much specific evidence at the moment that diet can reduce cancer risk. But a healthy diet may help and it will also lower your risk of other diseases, such as heart disease. To eat healthily:

The Saturdays Give Marie Curie Cancer Care Their Number 1 Spot ...

See how you can help Marie Curie in recruiting volunteers for its Great Daffodil Appeal.