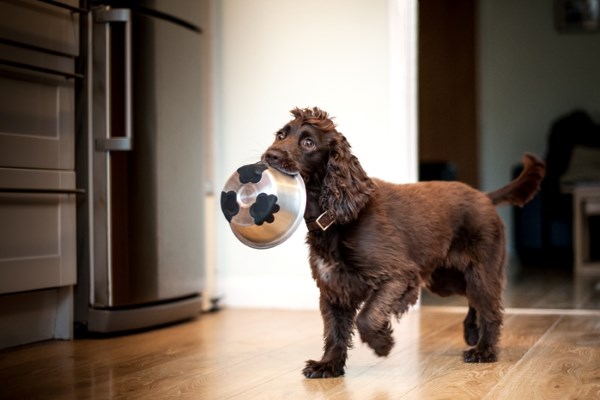 Modern, processed food is as unnatural for dogs as it is for us and it is worth considering changing feeding your dog to a more natural diet real dog food to ensure they remain as fit and healthy as possible.

It doesn’t matter which brand of dog food you use or how much it costs it is never going to be as good for your dog as raw, fresh meat, bone, and vegetable.

Vicky Marshall, founder of Honey’s Real Dog Food explains why we should all be looking a little more closely at what we are feeding our dogs and why we should be changing them to a more natural, healthy diet.

The first time a vet suggested giving our dog a bone to chew on I was slightly shocked. This, I though to myself, borders on malpractice. The poor dog will choke or, worse, he will swallow a bit of bone and then…well, I wasn’t quite sure what might happen but I felt certain nothing good could come of it.

I raised my objections. The vet explained why bones are so good for dogs but his words fell on deaf ears. ‘Look,’ he said after a few minutes, ‘I understand you have reservations. If I lend you some books will you promise to just flick through them? For Rudi’s sake?’

There’s nothing I wouldn’t do for Rudi so I borrowed the books and the next day over a cup of coffee I opened one at random and started to read. Half an hour later I was at the butchers buying a bag of bones. Forty-five minutes later I had an indescribably happy dog.

Why had I thought bones would be so bad for Rudi? Thinking about it now I realise that I had bought into the myth – promoted by the pet food industry, that the only food suitable for dogs was manufactured food. That is to say canned food, dried food, pouched food and a range of treats that included, ironically, fake bones.

It is not as if I didn’t know that dogs loved the real thing. Images of dogs drooling over bones (and sausages, come to think of it) featured strongly in the storybooks, comics and cartoon shows of my youth. At school we covered dogs in biology and learned, of course, that they were carnivores. Despite this I allowed myself to be brainwashed by clever advertising.

Processed dog food is bad for dogs on all sorts of grounds; it is cooked, it usually contains lots of grains, even the expensive stuff uses poor quality meat, it is packed full of preservatives and no matter how hard the manufacturers try to replicate the goodness of a natural diet it can’t match the benefits offered by a raw, meaty bone.

When Gary, my husband, came home and found me reading a book called Raw Meaty Bones he asked me if it was about the Mafia. In fact, it is one of the most important books about canine health and nutrition ever written. Its author is Tom Lonsdale, a British vet, and it tells the story of his battle with the veterinary profession trying to persuade them that manufactured pet food was doing dogs more harm than good.

Of course, the real thrust of Lonsdale’s book is that raw food is what dogs are biologically designed to eat. He points out that although humans have created dozens and dozens of different breeds of dog canine teeth and digestive organs remain unchanged. In the wild dogs eat their prey, bones and all.

In the wild, providing they have a choice, all animals eat what is best for them. For dogs this means small prey or, if hunting in a pack, a share of a larger prey. They are thrifty, too. Nothing is wasted and that includes the bones. Initially these are ripped, torn, chewed and sucked to remove all the meat and marrow. Then they are gnawed, crunched and (if small enough) eaten whole. No wild dog ever eats grain.

Bones contain a huge number of nutrients that are vital to your dog’s health including minerals, protein, essential fatty acids, fat soluble vitamins (A, D and E) and blood forming nutrients including copper and iron

By allowing your dog to chew on raw, meaty bones you ensure that they keep their teeth clean, avoid decay and that their gums healthy. This will mean they won’t develop some of the nasty oral diseases to which many dogs on processed food are prone. It will also mean they have sweeter breath.

Bones also give your dog great exercise. It strengthens their jaws and upper body. Indeed, it is a sort of mini-workout for them. You will also find that chewing bones keeps your dog happily occupied for hours.

In an ideal world you should be feeding your dog on whole animal carcasses or, at a very minimum, raw meaty bones plus – perhaps – other raw ingredients such as meat, vegetables, fruits, the odd egg and so forth. Easy to say, but not so easy to do. It is time consuming, messy, bloody and not necessarily that hygienic so Honey’s compromise is to provide food that contains raw meat, raw ground bones and raw seasonal vegetables.

We then suggest giving your dog bones ‘on the side’ – bones that have been stripped so that they have some meat and marrow but aren’t – well – yukky.

You can find a quick guide to the cost of feeding raw, along with answers to the many questions raised on this topic, and discover more by visiting www.honeysrealdogfood.com